Catch Up with Part One of this Adventure HERE 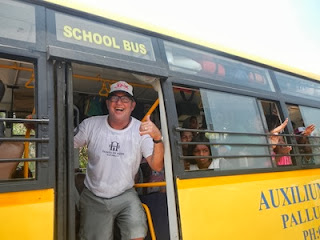 There I was, finally in Varkala. I have no clue where Jack, Keith, Jeff and the rest of the IndoJax crew will be staying. I had no idea how to find them. I started walking around town to get my bearings. Eventually, I decided to sit down for lunch at a restaurant. The first attempt went poorly as nothing I wanted to order was “possible.” I sat down in a second restaurant, and just as my food was coming out, around the corner walked Jack and Jeff! They were coming to the exact restaurant I was at, and it turns out that Coffee Temple had been helping with the Camp each year. The guys there already had lunch for the girls prepared. That restaurant would act as a base for breakfast, getting ready for the beach, and lunch for the rest of the week.  I’ll be honest, I didn’t know what to expect. I had been planning on helping IndoJax since the fundraiser for the 2012 trip because I knew I would be in India at the same time. If the past few days had seemed like a roller coaster, they were nothing compared to how I felt when the girls arrived and the Camp begun.  One moment I was in the water cheering and having a blast, the next moment I was in tears because a young girl has just thanked me with all of her heart for giving her the best day of her life.

How do you explain to people that surfing can be charity?  That you need to raise funds to take orphan girls for a weeklong surfing trip? Sure, people donate to orphanages and similar institutions all the time for food, education, and shelter needs. The second you tell people you’re doing a “surf charity” they kind of give you this odd glare. Before this trip I couldn’t have explained it either.  These girls arrive by bus, travelling anywhere from 5-17 hours. Some have never even seen the ocean; others have come to the charity for all 4 years now. One of the big success stories is Reena. Her eye was disfigured so that she could be a better beggar. The first year, she barely spoke to anyone. This year she was outgoing, friendly, and catching a ton of waves. Girls that were new this year would run up and grab my hand, just to put their toes in the water. The first day involved a ton of hand holding for the girls as they were swimming (while groups of 4 went for their surfing lessons with the IndoJax instructors). Day two there was still a lot of hand holding, but more going out into the surf. By day three I was OLD NEWS! They just occasionally screamed at me, “Auntie! Look!” as they ran face first into waves and got knocked down over and over. At that point I was cringing at the wipeouts some of these girls were taking on pool toys and the Naish inflatable board. But they were bouncing right up and hopping back on all the toys ready for another wipeout! The evolution from dipping their toes in the water into full-power, charging, rambunctious little girls is what this whole trip is about.  That is how I can begin to explain why one should raise money to do a surf charity. Surfing is an exercise in self-confidence, pride, and courage. It is NOT about giving them the best day of their life; to me that would be sad. To know that taking these girls surfing was the best day of their life, and that is where it ends in terms of best days, makes no sense in terms of the charity. By taking these girls out, we were giving them the ability to have more “best days." Armed with self-confidence and a little courage, these girls can go out and have fun in the future. In India, women’s rights are a bit of a problem. Women are not surfers or athletes; they are housewives first and foremost. Secondly, the caste system, even if many won’t openly admit it is still there, causes much prejudice. These girls are bottom of the rung in India, but they are just little girls. Many of them have not ever had the chance to be little girls, they have been dealt a life with a list of challenges too long and too horrid to mention.  The rollercoaster of emotion of being with the girls continued for the entire week, and I lost my voice from cheering for them. It was a lot of hard work keeping up with these girls, but I’ll tell you honestly that I had a blast playing with them in the water, getting my nails painted, and watching their smiles. Before we walked the first group to the bus, they had prepared a “Thank You” song for us. When they were done singing, there wasn’t a dry eye in the crowd. One of the little girls held my hand for the walk and motioned that she had seen Uncle Brandon cry. I told her yes, that he though the song was so beautiful that he cried. To lighten the mood a bit, I suggested that we should rename him Uncle Cry Baby. That caught on extremely fast, and soon all of the Uncles were “Uncle Cry Baby.” At the end of the week, I reluctantly watched as the last of the IndoJax crew packed and started making their way to the east coast for a dry run in Vizag. I wanted to go with them so badly, and there were a few moments where I almost hopped a plane. Unfortunately, I had made a commitment to help with the Spice Coast Open, India’s first surf & SUP event. Even though they announced the date a bit late, I’ve been working to help grow SUP in India and I had to leave for Kovalam.  I will surely be helping with the IndoJax event in the future as much as I can. Raising funds, hauling boards across the country, and trying to increase awareness of women’s rights in India.