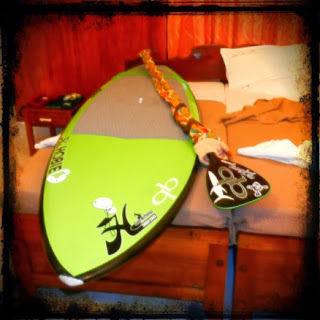 After traveling all the way around the world with 2 stand up paddleboards, I have a bit of insight into board repair. There are two main products that you need in your gear baggie to get your board back out in the water in the least amount of time. You didn't travel all that way just to sit on the beach and sulk at a broken board did you?

The possibilities are endless when it comes to board damage abroad. I’ve heard horror stories of SUP paddles being cut in half (for drug inspection, of course), boards broken in half, buckled, or with noses and tails missing, or worst of all – completely lost! No matter how hard we try to protect our precious babies, the evil airline luggage carriers and TSA’s the world over will unite to mistreat what we love. How do you forgive and forget, or at the very least, repair and ride?

Most people take the first step in protecting their board and buy a great protective bag. Other people go above and beyond to pack the entire board with foam and bubble wrap before putting it into its super-protective bag. Others may not buy packing material, but use clothes and other soft objects. For surfboards that may work, but sometimes the handlers are annoyed with the increased weight or bulky padding and throw those bags around even more! If they think it is safe they are more liberal. If it feels fragile, it has more of a chance of being treated as such.

For SUPs, you don’t want to add on any more weight because it will cost more than the astronomical amount you are already paying. Most luggage handlers have a harder time tossing around SUPs, which is an advantage over the surfboards. I’ve watched out of the airplane window as many picked up my hefty parcel and placed it into the plane. However, I’ve also gazed in horror as I saw a small man grab the back end of the bag and pull it off the truck until the front crashed to the ground where he proceeded to drag it across the tarmac like a child dragging a stuffed toy. Luckily, my boards were tough and the bag was amazing. Even incidents like this were no match for the Torque – ProLite combination. Invest in a good bag!

However, one day there was a giant drug bust in Delhi, and my board happened to be flying through Mumbai. The security agents were all worked up and excited to find drugs. They ripped open my ProLite and sliced it with a razor blade inside and out. When they were disappointed that no drugs were within the bag’s layers, they figured the board had to be made of drugs, so they stabbed it. Only twice, but with what I assume was a Phillips head screwdriver. The holes were deep.

THE PUTTY AND THE PUKA PATCH

In many travelling situations there aren’t any people capable of fixing a board. This is where FCS instant repair putty and Puka Patches come to the rescue! Some people would only use one or the other, but I must say that if you really love your board, no amount of protection from taking on water is too much.

After each flight, inspect your board before leaving the airport and report any damage if needed. If you are in a developing country, don’t bother. When you reach your accommodations take out your repair kit, scuff/sand the area, fill any gashes with FCS, and put a Puka Patch over any cracks.

The FCS putty has a distinct advantage when you need to fill a gash, hole, or missing nose/tail. I oftentimes relied on the FCS only between flights when the putty had time to dry. If I was unsure of the edges, I would slap a Puka Patch over the top. If there were any little cosmetic cracks that I was unsure of but required no filling, I would put a patch on.

Sometimes it isn’t always airline damage when you’re traveling. Pushing yourself to new levels can mean acquiring a few dings in your board. I always keep a Puka Patch in my pocket for small repairs. One such example being when a giant wave actually snaped the plastic clip holding my GoPro, it was still attached by the safety string, but was free to flop around and ding my board. Too small to stop me from surfing, but big enough to let water in, this was the perfect situation to slap on a Puka Patch. Of course, after I left the water I was sure to clean the area, scuff it up a little with some sand paper, and apply some FCS and then another Puka Patch.

The Puka Patch is also good for in race scenarios. When I pulled over in the Holland 11-Cities race to make a “pit-stop” I obviously rammed the side of my hollow board into a stick. There was a HOLE in my board. It took me a minute to realize this horrifying reality, but luckily I had a PukaPatch on hand to prevent the board from taking on more water, something that would have made the last 12 miles of the day much more difficult.  At the end of the day a group of us repaired the hole with a ton of FCS putty and Puka Patches after draining out the water.

Although I don’t have any solutions for split paddles or lost luggage, I can stress to you the importance of packing properly. Don’t overweigh your board, and don’t waste your time with too much extra packing. If it is going to get damaged, a layer of bubble wrap inside your ProLite bag is NOT going to make any difference. If you’re running a bargain bag, then lay on the bubble wrap, but in 10 layers.

I realize this sounds like a giant plug for FCS putty and Puka Patches, but it isn’t. Seriously, you just can’t have enough FCS putty or too many Puka Patches! Also always pack a little square of sand paper. It isn’t necessary, but it does help the bonding of FCS putty and Puka Patches (I think the Puka comes with a “scuff pad”). This combination will repair 90% of airline-induced damage, and unless you snap your board, it will take care of any dings you get while surfing, too. I even traveled with enough to repair other peoples’ boards! If you pack enough you can maximize your water time and maybe even make new friends.