As featured on Distressed Mullet: 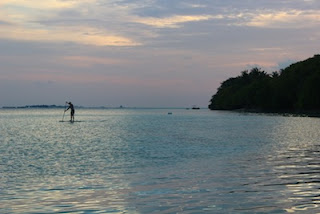 I just got back from the 2nd most amazing trip to the Maldives. The first most amazing would have been one in which I was on a live-aboard, hopping from island to island, surfing various breaks, and getting pointers from Colin McPhillips. Alas, unforeseen circumstances arose and Colin McPhillips was unable to make it to the coveted Perfect Wave Colin McPhillips & Moonwalker All-Board Adventure –this year. I’m ready for next year! There I was, with a decision to make, the tickets were already purchased to fly over to the Maldives but Corey (Lil’Spoon) and I only had one board, no clue where to surf, and didn’t want to spend a fortune (which happens quickly when trying to book things in the Maldives…). What to do? We only wanted our trip to be one week instead of the originally planned 2 because Corey could take that second week to fly down to help with the IndoJax Surf Charity in Varkala.  Surf Camp Luckily, Marie, our Perfect Wave representative found us a surf hotel with only 5 days to spare until our trip… at a better price than I was able to find after perusing the internet for hours. I kept looking and everything I found was already fully booked, nowhere near surfing, or way too expensive! Marie came to the rescue and booked us at the Cokes – Thulusdoo Surf Camp, which was not next to one, but TWO fantastic surf breaks. Furthermore, the camp had extra boards available for use (albeit no longboards or SUPs).

Corey and I flew in over the atolls of beautiful turquoise water. Once on the ground we got settled for 2 nights in Malé, the capital, and did some sight seeing. I was itching to get in the water, even though the only surf break in Malé is a finicky beast. No two waves are the same, the peaks are all over the place, the waves bounce off the sea wall and you get double peaks, troughs and the most insane constructive and destructive interference patterns I’ve seen. It looked beautiful and challenging! I hopped in and started surfing. In the first 3 seconds I had caught a monster of a wave. 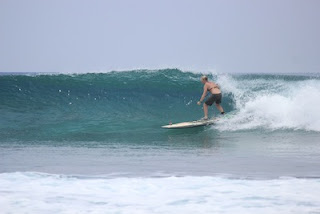 Unfortunately I got so excited about how awesome and long the ride was that I forgot to exit. By the time I realized I should probably get off the wave and paddle back out, it was too late. My reflexes were about 1 second too slow, and I was riding the white water in… only one problem… there was nowhere to go. I pushed the back of the board into the water so I could get off the wave, but I was still stuck inside a washing machine. Wave after wave came to wallop me, where I was trapped in this cove with no exit around the breaks. Each time I thought I had picked a way out, that crazy wave pattern in the cove would prove me wrong and smash me again. I finally battled out of there with no injuries, although I’m not sure how. There was a shallow reef, urchins, and rocks EVERYWHERE! After that I vowed NOT to get stuck inside again, and I didn’t.  Which brings me to a very important point. Even if you learn to surf in a nice sandy place, you should still learn how to fall, exit the wave, and get out as if the bottom is covered in painful sea urchins… it may be beneficial one day ☺ After that, I caught a few awesome waves, attempted some fancy turning maneuvers to no avail, and talked with some of the Maldivian locals. Toward the end of my run I was on an epic wave, right at the peak, paddling to catch it when one of the locals starts paddling to my right and yells, “WAIT, WAIT!!” Even though I clearly had the right of way, I wanted to respect the locals so I shoved my paddle in the water and hit the breaks. I lost my balance on the tippy-top of the wave and my board flew out from under me. As I went down, I saw the local surfer catching the wave, but I got incredibly nervous that my board was going to fly and take him out (SUPs hurt when they hit people in the head). I grabbed my leash as quickly as I could and gave it a strong tug. Corey was on the beach and said the board got VERY close to hitting him, so it is a good thing I grabbed it. But when I came out of the water, the board came flying into my eye.  Dumb.  It didn’t really hurt that bad, and I figured it was just a little bump. I hop back on my board to catch the next wave, when I notice there is blood everywhere. I’m the only one left on the water. The local that yelled at me to wait obviously wanted to catch his ride in so he could go to work and go about his daily business. I held my eyebrow together long enough to catch one last wave in. I get to the exit point and ask Corey, “Hey, if I put the two sides together like this [me pinching my eyebrow together], do you think we could fix it with a band-aid?”  He sternly insists, “No, your crazy, it’s too deep, we’re going to go get you some stitches!”

It's all Fun and Games 'till Someone goes to the Hospital.

Then it's just fun. 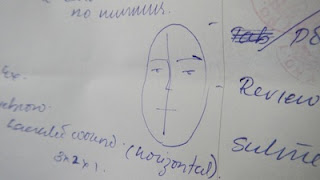 It really was only a tiny split, there just happens to be tons of blood vessels in that area. They stitched me up with three tiny stitches, and took x-rays of my brain to make sure there was nothing wrong… Boy, where they surprised! There is A TON wrong in there! The hospital in Malé was very clean, the doctors were nice, and it was extremely cheap. I’ve decided that I’m going to get all of my injuries overseas… where I can actually afford them.

After the hospital, we caught the ferry to Thulusdoo, where we would be for the next week. The breaks there were named “Coke’s” and “Chickens.” Coke’s was the break right outside our doorstep, and was a great right. Named for the Coca-Cola factory that is on the island. A paddle across the inlet or a $5 boat ride to the neighboring island brought you to Chickens, a left named such because there used to be a chicken farm on the island. We spent 5 full days relaxing on Thulusdoo, paddling, snorkeling, and surfing. A much needed break/vacation from being in India. Every time I went surfing I ended up paddling next to eagle rays or green sea turtles. It was amazing, and the water was crystal clear. The fish were astonishing, if Alex Hedman was a fish, he would be a Rainbow Parrot Fish. It’s a little goofy looking, very colorful, and a bit of a spaz. Admittedly, I often surfed with a mask on hand. Just in case I saw something super cool, I could abandon surfing and go have a peek underwater. Such is the Marine Biologist in me.

After catching some great waves and learning a little more about surfing, I can still say that I love surfing my SUP as opposed to a surf board. (If only for all of the wildlife I get to see while waiting on waves). Furthermore, there’s no use in pretending to be something you’re not, I’m lazy and I’m goofy looking. My SUP catches waves with ease with no hard work on my part, and then I look funny when I surf those waves.  Surfers may look way cooler than me when they catch the wave, I openly admit, but I’m having a blast being able to see fish and turtles, catching even the smallest waves, and looking awkward! 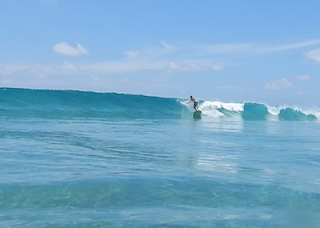 1. Bring your own gear (board, mask, snorkel, fins). Short boards are the easiest things to get, but the hardest to ride. If you are accustomed to SUP or a longboard, or even a board with more volume, you should bring your own. Also, if you’re not on Male, finding snorkel gear is difficult because shops are either non-existent or closed. Snorkeling off ever corner is amazing, so you should not pass up the opportunity to see more fish than you’ve ever imagined bring MFS.

2. Figure out where you’re staying and plan your activities in advance– traveling from island to island is either difficult or expensive. When we wanted to make SCUBA dives we had to time the local ferry (once a day) to go back to Male because there were no SCUBA charters on our island. If we wanted to go with a neighboring resort, it would have been insanely expensive to get to their private island and then use their gear.

4. Bring surf booties. I prefer my Vibram five-figers (toe shoes). I still feel barefoot and I can spread out my toes, and I didn’t get stuck by sea urchins. Many of the surfers cut their feet on the reef or got stuck by urchins. Even the best surfer, whose leash broke, had to walk through craggy rocks to get his board. He spent the next two days with his feet in buckets of vinegar to ease the urchin-induced pain. Just wear shoes.

5. Ladies, bring your cover-ups and some boyish clothing for going into towns. It is not cool to go to a Muslim country where most of the women are in layer upon layer of clothes in the heat and walk around with your butt hanging out (as we saw a few other tourists do.) Not only will the women hate you, but also you will receive unwanted attention from men.