Although I had heard of some people enjoying Hampi, I figured it would be just another tourist stop. I was completely wrong! As you can see in the picture below, it held quite a special adventure for me. I'm pretty sure that if I was ever on the Indian Sub-continent in a past life, this was my career.

I was a Stand Up Basketer.

Or SUB for short.

Read my "official" press release about becoming a professional Stand Up Basketer on the Mullet.

This obviously paved the way for my current obsession with Stand Up Paddling, a new craze that is incredibly popular around the world. But I cannot forget my roots as a SUBer!

The baskets are woven out of bamboo and gras, then lined with a thick canvas slathered with tar or sap. The paddles are made from bamboo shafts with pieces of wood tied to the end. It seems environmentally-friendly enough!

In all honesty, it was not easy to score my ride in the SUB. I was doing some hiking in the area when I saw my first SUB. It was upside down, and no one was using it. Unfortunately, they were using motor boats to ferry tourists across a small river. I went down and asked the ferry ticket guy if I could use his basket. They said no, and started turning me away. Luckily I had the super negotiator, Kartik, with me. He started talking to them and trying to convince them that I had to try this basket. They still insisted that I couldn't use it. Another man on the wayside overheard the conversation and mentioned that if we went with him we could get into the baskets. So, we hopped into an autorickshaw with this stranger and drove away to the baskets, and thankfully, that is where we went! Of course, when we arrive, the basket guy bringing us was not the same guy running the show. So, we had to haggle further to try to let them let me take the basket. I didn't want to sit idly by while someone else paddled me around - I wanted to do some SUB sprints!! It had been a while since I had been out on the water, so I needed some alone time with a paddle in my hand. Finally, I got my wish. I was able to take the basket out for a spin... Literally. In case you couldn't tell by the shape, if you paddle on one side, you just spin in circles. It was awesome, though. Especially once I figured out how to go straight!

All of the other basket ferry-men looked on in confusion, because women don't do much in this country, let alone hop in a basket and paddle it. 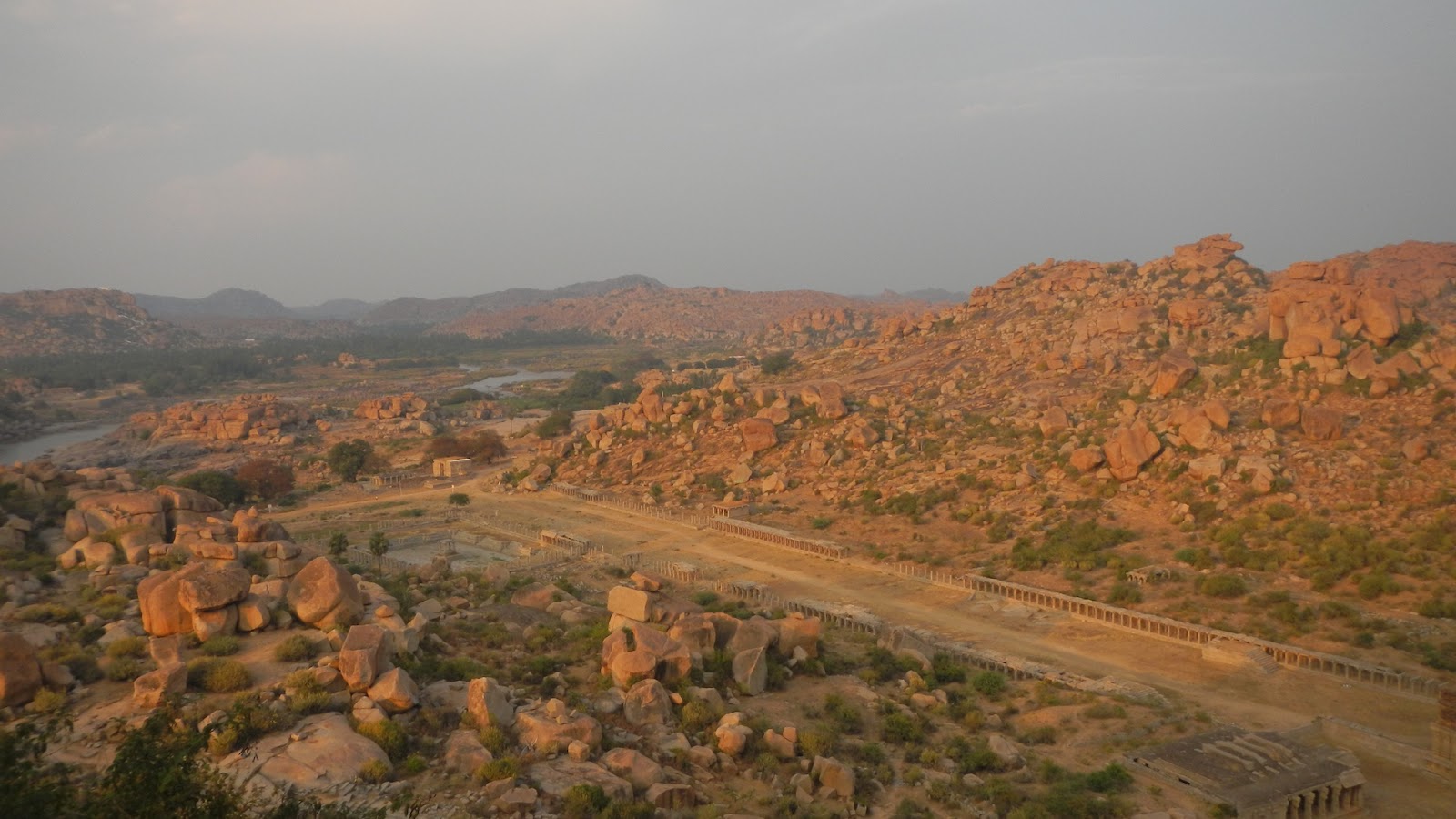 Other than my extremely joyous time SUBing, I have hiked and biked around Hampi and enjoyed the sights. The view from the mountain top temple, the highest point in Hampi, was beautiful. All of the ruins are quite interesting, but more interesting because they are not actually that old. Some of the sections look like they are actually currently being built, which is an ongoing joke between some westerners...

Before arriving in Hampi, we had a quick stop off in Bellary. With much thanks to Kartik and Vinay, we were able to explore the Bellary fort. Where we may or may have not gotten lost as the sun was setting. We deduced that we are terrible invaders because we were unable to get back into the fort so that we could follow the proper exit. Aside from enjoying a fantastic Valentine's day sunset with these guys, we hiked up, then down, then up, then down... then up, and down once more amidst the staircases of this massive fortress looking down on Bellary. Kartik and I also decided to take the road less traveled and hike through the marshy mote, a place I had to really not think "snake." In India, I'm realizing that when you think things, more often than not, they become reality.

From Hampi, Bel and I will travel down to Pondicherry via Bangalore. All by bus. Plenty of adventures to come!