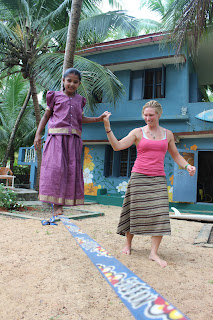 After some more insane travels, I’ve arrived in Kovalam for the 1st Official Surf & SUP event of India. With an abundance of ocean front cafes, I’ve had some time to sip some amazing South Indian Coffee and reflect on the events of the last week. Talk about a roller coaster! The extreme disparity between the highs and the lows of this trip were monumental.

Rollercoaster section 1: Get to Mangalore and pick up boards

It all began with the first leg of my trip, a simple flight from Pune to Mangalore. However, this time I tried to fly with my 8’6” Hobie SUP, which wouldn’t fit on the plane from Bangalore to Mangalore. There I stood trying to finagle my board into this little twin prop plane in the middle of a tar mac in India. It was agreed that it wasn’t going to fit, so they took the board to be rerouted through Mumbai. This took a bit of haggling on my part, because they just wanted to put it in a back room and wait for me to come back through the Bangalore airport… Yeah, RIGHT! I landed in Mangalore and checked with the airline desk, and they said I could pick it up in the morning. They did not give me any paperwork, tag number, confirmation, flight details, or general confidence that my board would in fact arrive the next day. This was the low beginning of the rollercoaster. Arriving at the Ashram was the first high. I took my regular creepy cab driver to the Ashram, the same guy I call every time I go to Mangalore, and enjoyed an afternoon catching up with the Surfing Swamis. They were super bummed that they were unable to make it down with me to help with the Surf Charity, but they had a lot of guests to tend to at the Ashram; they sent some foam surf boards in their place. The rollercoaster was climbing up. The next morning I woke up and went for a surf on my race board, this was the exhilarating top of the coaster. It went downhill from there as I tackled the task of finding my SUP surf board. I spent 2 hours trying to get anyone on the phone to tell me where it was and when it was landing. Finally, I got in touch with the Bangalore airport that gave me all of the information I needed. I hired a cab and went to pick up my board.  When I saw that my board had arrived, it was a rollercoaster high. When I saw what the Indian security officials had done to my beloved board, it was an underground low. The board bag had been cut with a box cutter inside and out to see if there were drugs packed inside. They also stabbed the board to ensure it wasn’t made of cocaine. (Thank you Hobie for making a robust board. Even when they scraped it and stabbed it, it held up and only sustained minor damages. It was too strong for them to destroy! Also, thank you for not making your SUP boards out of drugs; I would have been screwed.) I returned to the ashram, patched up my board, and went for a long paddle. This was the calm before the storm, I’m glad I took the time for a paddle.

Rollercoaster section 2: Get to Varkala

I’m sitting in the general room around 7pm, and I look up at Gaurav and say, “So, I have the cab all booked for tomorrow morning?” There was silence. He finally says, “Oh, no, I thought you needed it for Sunday.” He gets on the phone and starts calling around to see if there are any drivers available to take me, and 4 boards, down to Varkala. There was one, but he was charging about 3x more than a plane ticket, and 12x more than a bus ticket! I decided to try to book a train or a bus (I already know the plane out of Mangalore won’t fit my boards). Every mode of transportation was booked for the next three days. This was a heart breaking low. I wanted to be there the second the girls from the Homes of Hope orphanage arrived. I decided to take the car, even though it was way out of my price range. Temporary relief; about 15 minutes after I booked the car, he calls back and decides he doesn’t want to go. At this point, I’m screwed.  Gaura looks up at the clock and says, “There is one last option.”  I said, “I will do whatever it takes.”  “There is a bus leaving here in 20 minutes, it will get you to Mysore, where you can take another bus the next night to Varkala.” “Done.” I scrambled to pack all of my gear, and Sham joined me (there was a meeting the next day in Bangalore he needed to get to anyway). We rush to the bus, at which point, they realize that they still intended to send me with two foam boards for the girls surf lessons. Already at the bus, we held it from leaving. Druva and Arjun grabed the two foam boards and scooter to the bus stop. I’ll never forget the way they looked scooting around the corner, sitting on one 7’ board and holding another 6’ in the air as a bus went by and nearly blew them away. As scary as it was at that moment, I can laugh about it now. We load the 3 boards to the roof of the bus, but one board was too short to fit under where the straps had to be located, so we wedged it in there as best we could. As is tradition, the bus kept going and stopping to let me know that it was time to go. I climbed down and we drove away, sweating, but thankful we were underway. Sham and I talked a little about surfing and cricket before I passed out. Every large bump followed by a loud noise made my heart stop. Luckily, I was in a top bunk sleeper right under where the boards were strapped. At each stop I climbed out of my window, standing on my bed, to ensure the boards were still tight. We reached Mysore at 5am.  The roller coaster mellowed out for a bit here. I relaxed in the other Ashram in Mysore for the day, enjoyed some food, and then got ready to board another over night bus to Varkala. This time the boards were loaded under the bus, but it was a seated bus for 14 hours and I was solo. We stopped and I had some questionable food with a warm pink water drink, then I slept as much as possible. Upon waking, I checked my GPS and realized that we were headed nowhere near Varkala. I asked the bus guys, and they confirmed that we were going to Trivandrum, 2 hours south of Varkala. I told them to drop me on the side of the road as soon as they saw a taxi in a village closer to Varkala. They did as I asked, and I loaded three boards to the roof of a small rickshaw. I had no idea where we were going. All of the hotels in Varkala were booked when I called so I was headed into town with no clue. My backup plan was to go to Soul & Surf where there were some surfer friends for me to drop my gear and arrange accommodation. Unfortunately, it was at the top of a hill that my rickshaw driver refused to go up. After arguing a little, I was exhausted, and I just checked in to the first hotel on the side of the beach with vacancy. It was actually very nice; they had good food, space for the boards and agreed to keep an eye on them. My rickshaw driver then started insisting that I shouldn’t pay him with money, but I pay with kissing. He started getting rather pushy, so I finally had to set the money inside his rickshaw and walk away… quickly.