When Katie and April Call a Surf Comp 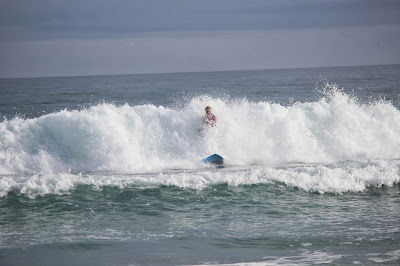 While watching the men's heats in the East Coast Paddle Surf Championships, my friend Katie and I realized that we had very different things to say about the competition. Although, much of what I was saying sounded a bit like an MC, what she was saying was extremely entertaining! We sat down at Epic food the other day and compiled this dialog of what it would be like if someone actually gave us the mic at an event. We realize we are nerds, but we had a lot of fun putting this together!

This article featured on Distressed Mullet!

Katie: Get out of the water NOOOOOOWWWWWW! Yeah, I’m talking to YOU! Kai Lenny wannabe!

April:  In heat one we have the Alex the Rainbow Tornado Hedmannnnnn in the yellow jersey.

April: Paddling in blue is Mike Tavares from Boardworks

Katie: That sounds so DIRTY!

April: Oh, here comes Rainbow tornado paddling for a wave and it’s a bust. He lets it slip right out from under him!

Katie: April! This is a FAMILY competition.

April: Tavares paddling into a nice waist-high wave, catching the wave, making a left turn, going down the line. .  .

Katie: No cutting in line, Mike!

April: We have green paddling into a wave, catching the wave and doing an immediate bottom turn.

April: I’m going to pretend you didn’t just say that. . .

April: The wave looks like it will close out. . . will he attempt a Carolina floater or smack the lip?

Katie: I drank a Carolina floater the other . . .

April: It doesn’t look like he’s going to be doing either. . . he just wiped out.

Katie: Wait-what is he doing?

April: He’s a little too close to the in-water photographer! Kid Rock hates the paparazzi!

Katie: FIVE MINUTES surfers! I want to see some ACTION! Make it worth my valet parking tip!

April: Alex Hedman paddling into a double over ankle monster wave! And there are dolphins on the horizon.

Katie: What I hear is, Alex, you’re getting schooled by a dolphin. Is that right, April?

April: That is correct, Katie. Oh look Tavares is paddling into another wave.

Katie: What is he DOING? Playing the hokey pokey?

April: Well, he is trying to turn himself around. The fin’s released and we had an excellent attempt at a flat spin.

Katie: Shred dog would have made it.

April: You are a tough crowd, Katie!

Katie: April why are Beausang and Jason on the same wave? Party wave? The beer’s here onshore.

April: That’s gonna be a tough heat to judge.